The relief felt by markets in July proved momentary, as August provided few sources of positive returns.  The month started similarly to how July ended; however, sentiment shifted following the release of the minutes from the July Federal Open Market Committee (FOMC) meeting, where participants “agreed that there was little evidence to date that inflation pressures were subsiding.”  Further, the minutes showed that discourse during the meeting “emphasized that a slowing in aggregate demand would play an important role in reducing inflation pressures.”

The yield curve shifted up between 27 bps (30-year) and 58 bps (two-year) during August as hawkish Fed rhetoric—from the July meeting minutes release to the Jackson Hole speeches—continued.  The two-year Treasury yield reached 3.4% during the month, surpassing its peak in mid-2018 and reaching its highest level since October 2007.  Aside from a 1.1% gain in leveraged loans and a modest 0.2% gain (USD hedged) in EM debt, rising yields caused a sell-off in most areas of fixed income.

U.S. Treasury notes and bonds sold off across the curve, with returns worsening as the time to maturity increased; intermediate-term Treasuries fell 3.4% and long-term Treasuries declined 4.4%.  Credit spreads were mixed, with investment-grade corporates narrowing 4 bps to 140 bps and high yield widening 15 bps to 484 bps.  Nevertheless, the spread cushion was not large enough to offset the rate increase, and as a result, investment corporates fell 2.9% and high yield corporates declined 2.3%.

The impact of rising bond yields was also felt across domestic and non-U.S. developed equity markets.  For the first half of August, domestic equities continued building on their positive momentum from July, with the S&P 500 Index gaining 4.3% through August 16th.  The second half of the month saw investors focus on the aforementioned hawkish comments from the Fed and a rapid rise in rates, causing the Index to give back its gains and then some.  The S&P 500 finished the month down 4.1% while the broader Russell 3000 Index declined 3.7%. 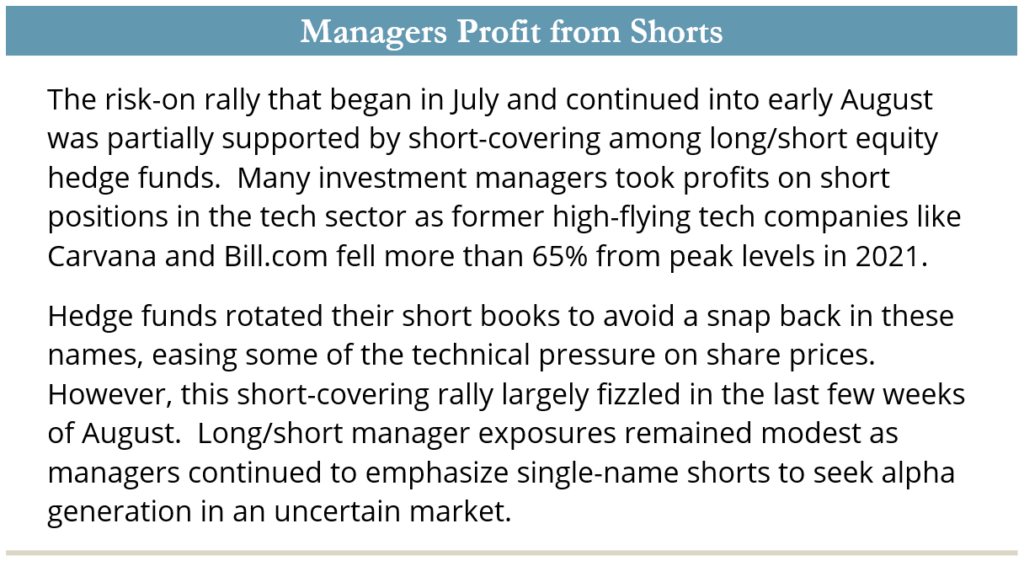 Nine of 11 GICS sectors posted drawdowns in August.  Real estate (−6.0%) was the worst performer, with IT (−5.5%) and healthcare (−5.2%) close behind.  The  consumer discretionary (−4.4%) sector followed suit, dragged down by drawdowns in Amazon (−6.1%) and Tesla (−7.3%).  On a positive note, energy continued its upward momentum, advancing 3.2% in August and extending its year-to-date gains to 49.2%.  Defensive utilities (+0.3%) stocks were the only other sector to finish the month in positive territory.

In local terms, the MSCI EAFE Index fell 2.3%; the Index fell 4.7% when the strength of the U.S. dollar is considered.  There were two similarities to U.S. equities: (i) global yields rose meaningfully, which put pressure on non-U.S. markets, and (ii) value outperformed growth (−3.4% for the MSCI EAFE Value Index in USD terms vs. −6.1% for the MSCI EAFE Growth Index).

Emerging markets moved opposite of developed markets, registering 0.4% gain (+1.2% local terms).  While developed countries grappled with fears of recession, countries like Brazil (+6.4%), Thailand (+5.6%), Indonesia (+5.2%), and India (+4.1%) were resilient on more favorable macro data.  Turkey was the top-performing country in the world, driven in large part by investors that poured capital into its equity markets in an effort to protect against surging price growth.  Annual inflation in Turkey approached 80% in August following a surprise interest rate cut.

However, these bright spots did not shine enough to turn attention away from China (+0.2%).  House Speaker Nancy Pelosi traveled to Taiwan on August 2nd, which was the first visit from a senior U.S. official in nearly 25 years.  The visit sparked outrage from Beijing and triggered weeks of military exercises around Taiwan in retaliation.  Geopolitical tensions remained elevated during the month, but direct military conflict was avoided.  A resurgence in COVID-19 cases, in combination with President Xi Jinping’s continued commitment to his zero-tolerance policy, led to another round of lockdowns and further dampened investor sentiment.  Despite this, China ended in positive territory as markets rallied in the final days of the month on news that U.S. and Chinese regulators reached an audit agreement that would potentially keep Chinese ADRs listed on U.S. exchanges.

Most real assets fell on economic growth and interest rate concerns, but there was a divergence with a decrease in spot oil prices and an increase in energy-related equities.  Crude oil prices fell 8.0% on growth concerns in China, slowing growth in the U.S. and Europe, higher interest rates, and continued strength in the dollar (making oil more expensive for foreign currency holders).  While crude prices fell, master limited partnerships (+4.0%), energy equities (+2.8%), and resource equities (+0.6%) posted positive returns.

Several factors drove the dichotomy during August.  Near-term crude prices fell by nearly $8/barrel; however, prices further out the futures curve—which drive the outlook and production hedging for companies in the sector—saw less significant declines.  Further, in contrast to crude oil, natural gas prices continued to increase in the U.S. and Europe.  It is noteworthy that natural resource equities and private natural resources can produce attractive cash flows and returns in a variety of commodity price environments—unlike commodities, which require increasing absolute prices.

Russia’s weaponization of natural gas supplies to Europe continues to drive prices higher and is increasing concerns that countries will be forced to ration supplies to industry, which could lead to a deeper recession.  The war in Ukraine and resulting energy crisis is causing some investors and governments to change their views on whether there is a need to continue to invest in natural gas, nuclear power, and even responsibly produced domestic crude oil—during what will likely be a multi-decade transition to 100% clean energy. Recently, the European Commission backed labeling natural gas and nuclear power as “green” and “sustainable” energy sources.

Clean energy stocks were flat following a 17% gain in July due to the passage of the Inflation Reduction Act, which will allocate approximately $370 billion to clean energy initiatives (mostly in the form of tax credits) and be a boon to the sector.

Elsewhere in real assets, REITs fell by 6.4% on the prospect of further interest rate hikes and economic growth concerns.  European REITs declined the most (-12.0%) given recession fears related to the energy crisis. Public market REIT declines have come despite strong rent growth and solid fundamentals across many sectors.  Historically, REITs have offered protection during inflationary periods, and may do so once again during this cycle.