Intensifying inflationary pressures cast an ominous cloud over the economy in July despite positive gains across many capital markets.  In addition to waning business confidence, consumer confidence neared all-time lows as recession fears grew.  The Bureau of Economic Analysis’ advanced second quarter GDP estimate showed a −0.9% annualized growth rate, which, when combined with a −1.6% first quarter GDP report, meets the technical definition of a recession.  However, the National Bureau of Economic Research, which is best known for declaring start/stop dates for the business cycle, did not declare the U.S. economy to be in a recession in July.  Given the persistence of an inverted yield curve, slowing economic indicators, and weak sentiment, the threat of an official recession is real.  Despite this pessimistic backdrop, nearly all asset classes performed well in July—perhaps a relief rally following the easing of some of the worst-case scenarios during the month.

After tipping into a bear market in June, domestic equities rebounded sharply.  The S&P 500 gained 9.2%, posting its best monthly performance since November 2020, while the broader Russell 3000 Index gained 9.4%.

Growth stocks, which tend to have longer duration and are more affected by Fed rate hikes, outpaced their value counterparts, with the 12.0% gain of the Russell 3000 Growth Index beating the 6.8% increase of the Russell 3000 Value Index.  However, year-to-date (YTD), value continued to outperform growth by more than 1,200 bps.  In a risk-on market environment, small caps bested large caps; the Russell 2000 Index gained 10.4% versus 9.3% for the Russell 1000 Index.

All GICS sectors posted gains.  Consumer discretionary was the best performing sector, led by Amazon (+27.1%) and Tesla (+32.4%), each of which beat earnings estimates.  IT was the second best performer, lifted by Apple (+18.9%) along with rebounds from software and semiconductor stocks.  Cyclical energy (+10.6%) and industrials (+10.6%) sectors followed closely behind.  Consumer staples (+3.4%) was the worst performing sector, lagging in a risk-on environment.  Communications services (+4.0%) and healthcare (+4.0%) also fell short of the broad market.  The communications sector was hampered by disappointing earnings from Verizon (−7.8%) and AT&T (−9.2%), while healthcare was dragged down by defensive pharmaceutical stocks.

The U.S. dollar (USD) was a difficult headwind to non-U.S. investments.  The dollar maintained its momentum in July, with the Dollar Spot Index rising 1.2% in the month  and 10.4% YTD.  The majority of the gain in the USD stemmed from weakness in the euro (−2.5%) as the EU faces heightened inflationary pressure and the threat of a recession.  Against other major developed market currencies, the USD weakened rebounds by the Norwegian krone (+2.2%), the Japanese yen (+1.7%), and the Australian dollar (+1.5%).  The Canadian dollar, Swedish krona, Swiss franc, and New Zealand dollar all rose against the dollar as well.

and pass reforms needed to receive EU pandemic recovery funds.  Draghi’s resignation placed that progress at risk, but further bailout funds should provide incentive to stay the course.  On the day of Draghi’s resignation, the ECB hiked rates for the first time in over a decade.  The 50 bps increase was higher than expected and doubled the ECB’s previous guidance.  It appeared to be the result of a compromise tied to the Transmission Protection Instrument, a new bond purchasing program intended to help prevent excessive increases in borrowing costs for more indebted countries.  Europe closed the month on a strong note, posting 0.7% GDP growth in the second quarter, well ahead of economic forecasts.  A surge in tourism in countries like Spain, Italy, and France helped make up for weakness in manufacturing and rising inflation.

Emerging markets equities (−0.2%) were flat.  While most major markets rebounded—including India (+9.3%), Korea (+5.8%), and Brazil (+5.5%)—China (−10.8%) was a notable outlier and dragged down the broad market return.  China had rallied in the previous three months, but the fallout from the country’s zero-COVID policy containment measures started to emerge in July.  Reports indicated the economy expanded just 0.4% year-over-year in the second quarter—its second-worst quarterly growth figure in 30 years.  A debt crisis in the property sector, which accounts for an estimated 25% of GDP, contributed to the slowdown in growth.  Tighter financing requirements, declining home sales, and, most recently, the threat of suspended mortgage payments on incomplete, pre-sold construction projects strapped over-levered Chinese property developers.  China’s central bank announced a $148 billion bailout toward the end of the month in an effort to stabilize the sector.

Following the June meeting, when the Federal Open Market Committee (FOMC) hiked rates by 75 bps, the Federal Reserve effectively guided markets to another 75 bps rate hike at the July meeting.  The Fed followed through with that hike at the end of the month and Chair Jerome Powell directed  investors to use the estimates from the June Summary of Economic Projections (SEP) for the path of rates for the remainder of 2022. 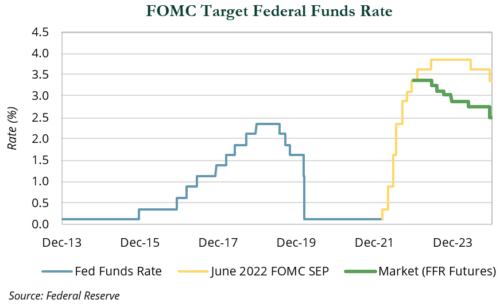 Fixed income markets rallied during July as yields modestly decreased and spreads tightened. The Bloomberg U.S. Aggregate Index was up 2.4% and the Bloomberg U.S. Treasury 5-10-year Index was up 2.5%.  The rally in investment-grade corporate credit was led by BBB-rated bonds, which saw spread tightening of 13 bps.  High yield credit experienced notable spread tightening of 100 bps, leading to a 5.9% return.

Although market expectations are aligned with Fed projections for the remainder of the year, there are some factors to consider.  First, the spread between the 2-year and 10-year Treasury yields (“2s10s”) inverted (or went negative) in mid-July and stayed negative for the remainder of the month.  Historically, such an inversion has been a fairly reliable signal for a recession in the future.  Second, markets believe the federal funds rate will reach 3.4% by the end of the 2022 and begin an easing cycle in mid-2023.  The June SEP shows the Fed hiking rates roughly 50 bps more in 2023, and not beginning an easing cycle until sometime in 2024.

markets, including resource equities (+7.4%), infrastructure (+4.0%), commodities (+4.3%), and REITs (+8.0%). Despite ongoing fears of an economic downturn, supply and demand fundamentals remained tight in many segments.  Most real asset categories delivered strong absolute returns YTD and continued to outperform broad markets in the current inflationary environment.  REITs (−14.0%, YTD) have been the exception, despite rising demand and increasing rents in many subsectors.  Historically, REITs have offered protection during inflationary periods, and may do so once again during this cycle.

Elsewhere, clean energy equities (+17.6%) sharply outperformed due in part to news of a proposed Inflation Reduction Act agreed to by West Virginia Senator Joe Manchin and Senate Majority Leader Chuck Schumer.  If passed in its current form, the bill would allocate $369 billion to clean energy initiatives, mostly in the form of tax credits.  Irrespective of the bill’s passage, the sector continues to benefit from secular tailwinds and increases in renewable energy production—nuclear power and liquefied natural gas are viewed as critical to eliminating Europe’s dependence on Russian gas.

European natural gas prices increased 31.0% and reached levels not seen since the outset of Russia’s invasion of Ukraine.  Higher prices in Europe spilled over to U.S. natural gas markets (+25.8%) amidst a significant ramp up in liquefied natural gas exports to Europe.  Russia sharply reduced natural gas supplies to Europe during the month, with flows on the primary conduit to the continent reduced 20%.  Russia appears intent on continuing to weaponize natural gas supplies, creating the potential for severe rationing during the winter season and a slowdown in economic activity.