June was a difficult month for public markets.  While investors remained concerned about inflation and geopolitical risks, fears began to grow regarding a downturn in the business cycle.  Even though economic data released during the month was weaker than expected, the Fed remained hawkish and steadfast in its tightening cycle.  The Federal Open Market Committee (FOMC) raised rates by 75 bps in June and guided for increases of 50–75 bps at the next several meetings.  Front-loading rate hikes in an effort to tame inflation caused a drastic change in the path of the policy rate.  Fed Chair Jerome Powell continued to assert that the goal of the FOMC is to engineer a soft landing, but acknowledged it will be “very challenging” and that a recession is “certainly a possibility.”

Unfortunately, there were few safe havens to preserve capital outside of the U.S. dollar (USD) and T-bills.  On June 13th, the S&P 500 tipped into a bear market, closing down over 20% from its highs.  Ultimately, the bull market lasted from March 23, 2020 to January 3, 2022, with a cumulative gain of 120% and an impressive annualized gain of 56%—one of the strongest bull markets on record.  However, it was also one of the shortest, lasting only 22 months; by comparison, eight out of the last 11 bull markets lasted over three years.

The S&P 500 peaked in January 2022, meaning the bear market is already over five months old.  Since 1956, the average bear market lasted 12 months, experienced a 33% drawdown, and took 22 months to recover.  The breadth of the June sell-off that pushed the Index into the bear territory was pervasive.  As the bear market set in, only 2% of S&P 500 constituents traded above their 50-day moving averages.  The speed of the decline was also notable.  From June 2nd to June 16th, the Index was down more than 12%, marking its worst performance streak since the start of the pandemic.

The S&P 500 ended June down 8.3% while the broader Russell 3000 Index posted an 8.4% decline.  Size was not a driver of performance as the Russell 2000 Index only outperformed the Russell 1000 Index by 20 bps.  There was also little daylight between value and growth indices with the Russell 3000 Growth Index beating its value counterpart by just 100 bps.

All 11 GICS sectors finished the month in negative territory.  Healthcare (−2.2%) was the best performing sector, buoyed by modest gains from biotech and pharmaceutical stocks.  Defensive sectors also held up relatively well; consumer staples (−2.7%), utilities (−5.2%), and real estate (−7.5%) all outpaced the broad market.  Energy (−17.0%)—by far the best YTD performer through May—posted the worst results in June. Other cyclical sectors like materials (−15.1%) and consumer discretionary (−11.0%) also sold off as concerns about a recession came into focus.

Fixed income investors faced two critical challenges they have not experienced in decades: the highest level of inflation since the 1970s and a sharp tightening cycle last adopted by the Fed in 1994.  These challenges have led to extreme interest rate volatility.  The ICE BAML MOVE Index, which measures the implied volatility for interest rate options (the fixed income equivalent of the VIX), fell from 107.12 at the beginning of the month to a low of 97.73 in the first week of June before growing to 135.50 at end of the month. 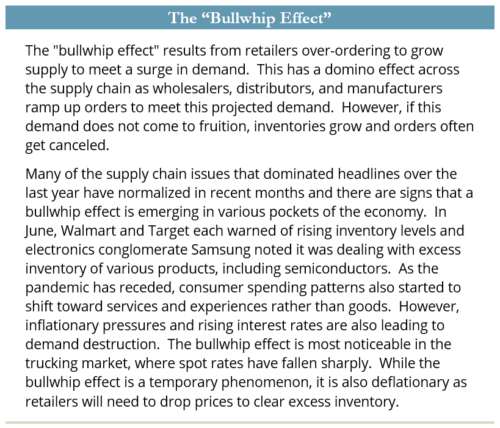 Yield curve shifts were more pronounced on the short end of the curve.  The 3-month and 2-year Treasury yields were up 59 bps and 39 bps, respectively, while the 10-year and 30-year Treasury yields increased by 13 and 7 bps, respectively.  While rising rates have been one of the more important factors for this drawdown, wider credit spreads—as evidenced by the weakness in corporate bonds shown below—were a bigger factor than rising bond yields.

with natural resource equities (+15.9%), commodities (+18.4%), infrastructure (−0.5%), and short-term TIPS (−1.4%) delivering strong relative YTD performance.  REITs, which have historically offered protection during inflationary periods, have been the exception.  They declined 20.4% YTD despite strength in underlying fundamentals across many sectors, including higher occupancy rates in the lodging sector and strong re-leasing spreads in the apartment sector.  However, even this asset class couldn’t hide from rising recession fears.

Non-traditional investments also had a difficult month as digital assets experienced their worst month of the year, with Bitcoin down 37.8%.  The risk-off environment exposed weaknesses within the digital assets ecosystem due to excessive leverage, inappropriate collateralization, and duration mismatches.  The crypto crisis began in May with the implosion of the Terra (LUNA) platform and its associated algorithmic stablecoin Terra USD (UST).  It continued into June with the suspension of withdrawals by crypto lending platform Celsius, the liquidation of Three Arrows Capital, and FTX’s acquisition of embattled crypto lender BlockFi—once valued at $2 billion—for $25 million.

In recent years, hedge funds have invested heavily in venture capital, accounting for roughly 25% of private equity deal capital in 2021, according to  IHS Markit/S&P.  The investments came through dedicated funds, but also hedged and long-only strategies with opt-in private investment sleeves.  As public securities declined in value, the composition of many hybrid funds have changed dramatically, with private investments growing disproportionately large due, at least in part, to a lag in valuations.  This can impact both investors’ liquidity and strategies, as fund managers may be limited in their ability to rebalance or otherwise shift their portfolios.  This dynamic bears watching in the second half of the year.