Russia launched a full scale invasion of neighboring Ukraine this week.  Tension had been building in the region since Russian President Vladimir Putin mobilized Russian troops near the Ukraine border in November 2021.  The invasion began Thursday morning as the Russian army crossed Ukraine borders and bombed key military targets.

The magnitude of these events cannot be overstated.  We stand with the countless world leaders who have expressed outrage and condemned the attacks.  We hope for a swift, peaceful conclusion that results in no further loss of life or liberty for the Ukrainian people.

While markets have been reacting to escalating tensions in the region for a number of months, they responded sharply this week as the worst fears became realized.

The initial impact on markets has been most pronounced in the energy space.  Oil prices, which were already up over 20% year-to-date through February 23rd, continued to spike more than 6%, with Brent crude up to $104/barrel and WTI above $97/barrel through February 24th (intra-day).  Natural gas prices, which remain largely regional despite steps toward global integration, increased approximately 40% in Europe.   Global oil inventories are at their lowest levels since mid-2014.  The Brent crude oil futures curve is in steep backwardation, indicating the near-term market for crude is exceptionally tight.

Although energy only accounts for approximately 7.3% of the CPI, higher energy costs impact (on a lagged basis) other CPI categories, including transportation, clothing, apparel, and food & beverages.  With CPI at 7.5% as of January 31st, elevated energy prices may further contribute to inflationary pressures.  Food prices are a potential concern as fertilizer uses large amounts of natural gas and Russia and Ukraine account for approximately one quarter of global grain exports.

Further, Russia produces just under half of the world’s palladium and both countries export smaller portions of other metals such as platinum, nickel, aluminum and steel.  Disruptions to supply for a range of these commodities, due to the conflict itself, sanctions, or Russian countermeasures would likely have an inflationary impact across the West.

Global equity markets were roiled by news of Russia’s invasion.  The severity of losses varied across regions depending on their proximity and economic ties to the countries in conflict.  As for Russia itself, its MOEX benchmark fell approximately 35%, its largest ever one-day drop.  The impact of Russia’s severe decline on global investors is mitigated by its lack of representation among global and emerging market benchmarks.

As tragic as these events are, equity markets have historically taken geopolitical events in stride.  In most instances, drawdowns from these types of market shocks have been relatively modest and resulted in speedy recoveries.  Data by LPL Research shows that on average, geopolitical events resulted in a roughly 5% drawdown in the S&P 500, taking 20 days to reach the bottom and 43 days to recover. 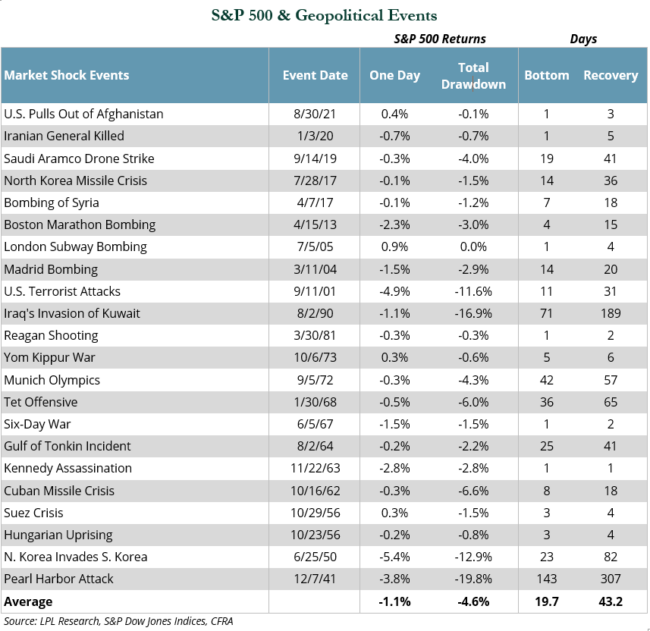 Despite the turmoil in markets during this brief period, there is an expectation that monetary policy initiatives in the U.S. will continue.   While risk assets declined following the invasion, U.S. Treasuries maintained their status as a safe haven and investors flocked to the asset class, driving yields lower and the curve flatter.  At the open of trading on Thursday, futures contracts on the federal funds rate continued to forecast a total of six rate hikes in 2022.  Higher energy prices caused breakeven inflation rates for the next five and 10 years to widen.  However, future inflation expectations, as measured by the 5×5 forward breakeven inflation rate, showed that investor expectations remain anchored around 2%.

We are appalled by the actions of Russia and hope for a quick end to these attacks.  Without question, this shocking escalation will cause a level of reverberating turmoil we have not witnessed from a geopolitical event in some time.

During periods of instability and uncertainty, it is important to maintain a long-term view despite the focus on these immediate tragic events and sharp market fluctuations.  The investment plans we develop with clients are designed to withstand periods of uncertainty.  We will continue to share any updates as necessary.  As always, please reach out to your client team with any questions.

To our friends, family, and clients with loved ones in Ukraine, our thoughts and prayers are with you during this difficult time.

Indices referenced are unmanaged and cannot be invested in directly.  Index returns do not reflect any investment management fees or transaction expenses. All commentary contained within is the opinion of Prime Buchholz and is intended for informational purposes only; it does not constitute an offer, nor does it invite anyone to make an offer, to buy or sell securities.  The content of this report is current as of the date indicated and is subject to change without notice.  It does not take into account the specific investment objectives, financial situations, or needs of individual or institutional investors. Some statements in this report that are not historical facts are forward-looking statements based on current expectations of future events and are subject to risks and uncertainties that could cause actual results to differ materially from those expressed or implied by such statements. Information obtained from third-party sources is believed to be reliable; however, the accuracy of the data is not guaranteed and may not have been independently verified.  Performance returns are provided by third-party data sources.  Past performance is not an indication of future results. © 2022 Prime Buchholz LLC