Investor attention turned to China in July as a spike in regulatory activity had a profound impact on equity returns that reverberated across much of Asia.  Chinese technology, internet, and ecommerce names had already been under pressure due to probes into a host of prominent companies in the space since the Ant Group IPO was pulled in November 2020.  Concerns were stoked further when the Cyberspace Administration of China took actions against ride-hailing platform Didi that would wipe away roughly a quarter of the company’s value just days after its $4.4 billion IPO on the NYSE.  Chinese regulators later took aim at the for-profit education industry, where surprisingly draconian measures included banning these companies from making profits and raising capital.  While the education companies most significantly impacted were not as widely held by institutional investment managers or broad benchmarks as China’s tech giants, the news furthered concerns over Chinese companies given the swift and harsh nature of the crackdown.

As the month came to a close, Beijing sought to ease the fears it had created for global investors.  Efforts were made to assure investors that the severity of recent actions were contained to the for-profit education industry and that China’s foreign listings were not in imminent danger.  Markets responded favorably to these sentiments, but even with a modest recovery in the closing days of the month,  Chinese tech stocks finished down 22% in July—their worst month since the Global Financial Crisis.  Three of China’s largest companies by market cap—Alibaba (−13.9%), Tencent (−18.0%), and Meituan (−32.9%)—all operate in the internet/ecommerce space and were down significantly for the month.  The MSCI China Index fell 13.8%, weighing down the MSCI Emerging Markets (EM) Index (−6.7%).  Sharp declines across China tech and e-commerce names also contributed to value maintaining its leadership over growth in EM, as the MSCI EM Value Index (−4.8%) outperformed the MSCI EM Growth Index (−8.6%).

With the exception of India (+0.9%) which began reopening its economy after struggling with a severe second wave of COVID-19, most major Asian markets fell in tandem with China, albeit to a lesser degree.  Specific to India, strength was diversified by sector and included financials, technology, and materials.  Outside of Asia, performance dispersion among the top 10 EM countries by market cap was wide, with Mexico (+2.3%) and Saudi Arabia (+0.6%) reporting small gains.  Brazil (−6.1%) pulled back amidst a continued health crisis and a bumpy vaccine rollout, which included allegations that government officials sought bribes for vaccine purchase contracts.

Developed markets were not as vulnerable to the headlines coming out of the east, and style leadership varied as a result.  In the U.S., value rebounded during the last week of July, but growth still managed to outperform by over 200 bps for the month.  Year-to-date (YTD), the Russell 3000 Value Index’s 18.3% return is only 240 bps ahead of the 15.9% return for the Russell 3000 Growth Index.  As measured by S&P 500 GICS sector classifications, energy (−8.4%) was by far the worst performing sector during a month when all remaining sectors excluding financials (−0.4%) posted gains.  Among key growth sectors, health care (+4.9%) and technology (+3.9%) were top contributors, while real estate (+4.6%), utilities (+4.3%), and communication services (+3.6%) were other sectors that outperformed the broader market.

Outside the U.S., optimism over robust corporate earnings—which were even stronger than those of the U.S. as of late—was stifled by rising infections stemming from the delta variant of COVID-19.  Value lagged growth by nearly 200 bps for the month as reopening progress was threatened, which, in turn, hampered more cyclical segments of the market.  Energy (−3.4%) was again the weakest performer, giving back a portion of the gains from earlier in the year.  From a country perspective, Japan (−1.3%) continued to battle a steady rise in COVID-19 cases, while Hong Kong (−2.9%) was weighed down by the events that transpired in China.  Japan has also been one of the more notable disappointments so far in 2021.  COVID-19-related concerns threatened the status of the Summer Olympics while a scandal at Toshiba led the global investment community to question the country’s recent progress on corporate governance.

On a YTD basis, the 10-year U.S. Treasury breakeven inflation rate rose 41 bps as a result of an improved economic outlook and rising inflation pressures. The rate widened by 8 bps in July to 2.4%, reflecting a modest rise in inflation expectations being priced into the market.  Longer-term Treasury rates declined, with the 30-year note falling 17 bps and the 10-year note falling 22 bps.  The yield curve experienced flattening as the 10-year to 2-year yield split decreased by about 15 bps.  Yields falling on the long end resulted in solid gains as the Long U.S. Treasury and Long Corporate Credit Indexes gained 3.6% and 2.3%, respectively.  The 10-year Treasury note started the year at a 0.93% yield then hit a high point of 1.74% on March 31, 2021 and has since decreased 50 bps. 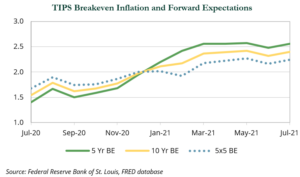 Real asset performance was mixed, with real estate (+3.9%) outperforming.  Returns were buoyed by the residential sub-sector (+10.9%), which includes traditional apartments (+10.7%), manufactured housing (13.6%), and single-family homes for rent (+8.8%).  While a segment of renters face potential evictions after the CDC’s eviction moratorium expires, the sector overall experienced solid demand and steady growth in rental rates, particularly in markets with strong home price appreciation and demographic trends.  The decreasing affordability of for-sale housing, and an overall U.S. housing shortage (for-rent and for-sale), which is estimated to exceed 4 million units, has been a tailwind to the sector in recent months.  Elsewhere in real estate, industrial (+6.9%) posted another strong month, as vacancy rates remain low and rental rates continued to move higher, with demand outstripping new supply across many markets.