When market dislocations occur, the notion that “cash is king” is a popular saying by market participants. Unfortunately, how that cash is invested dictates whether cash is a king or a pauper.

Prime money market funds (MMFs) invest in a wide array of securities such as commercial paper issued by corporations, bank certificates of deposit, and other types of short-term corporate notes. Treasury MMFs and agency MMFs are only allowed to invest in U.S. Treasury securities, Treasury repurchase agreements, or certain issuers of U.S. government securities.

According to the Investment Company Institute, prime MMFs experienced approximately $85 billion in outflows for the week ended March 18th, while government MMFs had $249 billion of inflows.

Last week, Goldman Sachs injected $1.0 billion into two of its prime MMFs and BNY Mellon infused $1.2 billion into its own prime MMF on March 20th.

Wider bid-ask spreads indicate that market makers are seeking additional compensation in return for risking their capital. This has occurred at a time when these funds were reportedly experiencing significant redemptions, forcing managers to raise cash.

During the financial crisis, the Reserve Primary Fund “broke the buck,” which sparked a run on MMF assets. The SEC responded by enacting new money market rules that were meant to improve the liquidity of MMFs. These rules, which are outlined in more detail later in this report, became effective in 2016. The two primary areas of the rules we discuss in more detail are floating NAVs and liquidity thresholds.

The SEC mandated that prime MMF NAVs must reflect current market conditions because of their inherent credit risk. As a result, the NAV can “float” at more or less than $1.00. The rules provided that Treasury and agency MMFs could continue to offer a $1.00 NAV.

Regarding daily and weekly liquidity, the regulations require MMFs to hold:

If a MMF breaks these thresholds, new purchases must be made that will restore them. Liquidity fees and gates are available to managers to maintain the stability of the fund. Under the rules, a fund:

The heavy redemptions experienced by the Goldman Sachs and BNY Mellon MMFs forced the managers to sell as much as they could. However, ultimately, liquidity thresholds were violated. Rather than impose liquidity fees or gates on investors, the firms injected cash into the MMF products in order to restore the minimum liquidity thresholds of the funds.

The Federal Reserve announced a number of lending programs on March 18th to support MMFs. Two days later, it widened the scope of these programs. The main facilities to support MMFs include commercial paper funding and MMF liquidity facilities. The Fed is also allowing primary dealers to obtain low-cost financing if they transact with MMFs.

We advise clients to primarily invest in Treasury MMFs for any immediate to short-term cash needs as they offer the most liquidity and are the safest products for cash.

Agency MMFs are relatively safe and liquid as well. However, the yield advantage they used to offer over Treasury MMFs has largely disappeared. Without the modest yield advantage, we believe that Treasury MMFs are superior.
Given the turn in market liquidity, we recommend clients evaluate the risks in their cash portfolios and assess the trade of adding incremental yield relative to the risks associated with prime MMFs.

The SEC’s new money market rules were adopted in mid-2014 and became effective in October 2016. The SEC defined three groups of MMFs (institutional, retail, and municipal) and imposed specific rules on each, which are outlined below: 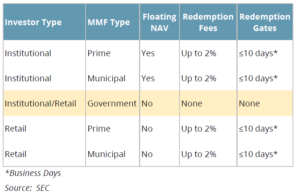 Though the potential yields they offer are lower, the primary reason we recommend Treasury and agency MMFs is that they are the only vehicles that do not impose redemptions fees or gates.

The redemption fees and gates are available for the MMFs identified in the table above if redemption activity causes the fund’s assets to breach the aforementioned liquidity thresholds.

Rather than impose fees or gates on clients, Goldman Sachs and BNY Mellon chose to inject cash into their products to bring them back into compliance with liquidity thresholds. Nonetheless, investors assume risks such as redemptions fees and gates with these types of cash vehicles.

All commentary contained within is the opinion of Prime Buchholz and is intended for informational purposes only; it does not constitute an offer, nor does it invite anyone to make an offer, to buy or sell securities. The content of this report is current as of the date indicated and is subject to change without notice. It does not take into account the specific investment objectives, financial situations, or needs of individual or institutional investors.
Information obtained from third-party sources is believed to be reliable; however, the accuracy of the data is not guaranteed and may not have been independently verified. Performance returns are provided by third-party data sources.
Past performance is not an indication of future results.
© 2020 Prime Buchholz LLC